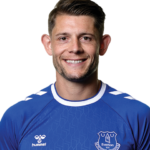 James Alan Tarkowski (born 19 November 1992) is an English professional footballer who plays as a centre-back for Premier League club Everton.

Tarkowski began his professional career at Oldham Athletic of League One, where he made 89 appearances across all competitions. In January 2014, he moved to Brentford for an undisclosed fee, winning promotion to the Championship in his first season. Two years later he signed for Burnley. He made his debut for England in March 2018, starting in a 1–1 draw against Italy.