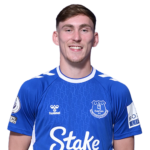 James David Garner (born 13 March 2001) is an English professional footballer who plays as a central midfielder for Premier League club Everton and the England under-21 national team.

Born in Merseyside, Garner joined Manchester United’s youth system at under-8 level. He made his first-team debut at the age of 17, in a Premier League game against Crystal Palace in February 2019. He spent time on loan at Watford and Nottingham Forest. In the 2021–22 season, he helped Forest gain promotion to the Premier League by winning the play-offs. Garner made seven first-team appearances for United in total, before joining Everton in September 2022.