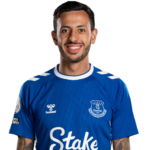 Dwight McNeil joined Everton from Burnley in July 2022, the winger signing a five-year contract to keep him at Goodison Park until at least summer 2027.

A product of Burnley’s academy, McNeil played 134 Premier League games for the Turf Moor club and was twice a top-flight ever present.

McNeil, who joined Burnley at the age of 14 following time in the academy at Manchester United, made his senior professional debut, aged 18, on the final day of 2017/18.